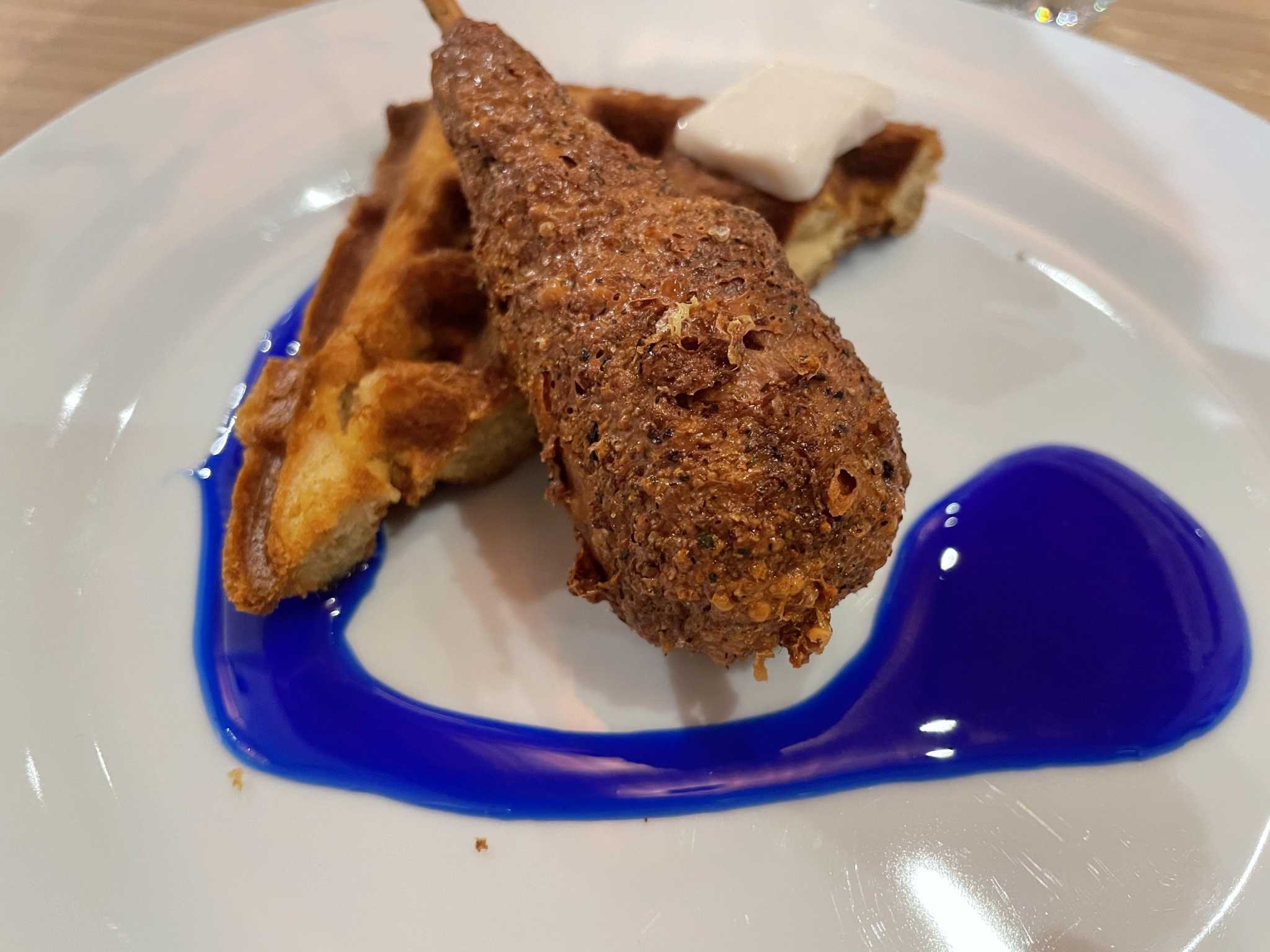 Imagine a world where the steak is made from microscopic fungi, the lettuce is grown by robots and the cheese is biologically identical to the real thing, yet never came from an animal.

Actually, all of those items already exist.

Bay Area journalist Larissa Zimberoff hosted two “future food” dinners at San Francisco’s 18 Reasons this week inspired by her new book, “Technically Food: Inside Silicon Valley’s Mission to Change What We Eat,” as well as by what high-tech vegan eats are likely to be on our plates 10 years from now.

The intimate 24-seat dinners were open to the public and demonstrated how those foods can be used in familiar dishes. Cooking in the future is “going to be more futuristic, more Jetsons,” Zimberoff said.

Much of the innovation happening in the food tech industry is based in the Bay Area, and it’s drawing billions in investment. The alternative protein sector alone raised $3.1 billion in 2020, according to the Good Food Institute, an advocacy nonprofit focused on plant-based and cultivated meat. Bay Area companies such as Impossible Foods, known for its soy-based Impossible Burger, and Eat Just, popular for its mung bean-based egg, became household names after entering major chains like Burger King.

Still, despite the ubiquity of certain products, Zimberoff predicts that these foods are unlikely to make up the bulk of our diets. “It’s going to take 10 years for these things to really be out there. But even then, it’s going to be a tiny fraction,” she said.

The meals naturally drew people connected to some of these businesses, including the Every Company, a South San Francisco outfit formerly known as Clara Foods that develops animal-free egg proteins, and Air Protein, a Berkeley company converting carbon dioxide into protein. The Monday event was interactive, full of discussions about the environmental pros and cons of items, as well as how to cook them at home.

To some, the dinner carried a strange feeling that each course served as an advertisement for a tech company, with Zimberoff sharing the sales pitch and detailing where to buy each product. The reason may simply be because diners aren’t used to hearing about tech companies when they’re eating. But it wasn’t so different than going to a trendy farm-to-table restaurant and seeing the names of ranches and orchards on the menu.

Here’s a closer look at the six courses served at these dinners, prepared by local chef Phil Saneski. Together, they serve as a rare snapshot of what’s going on in the food tech industry right now, what’s still emerging and whether the future tastes any good.

Kale Caesar: It looked like a normal salad, and it tasted like a normal salad, too. The futuristic aspect comes from the greens, grown in South San Francisco company Plenty’s LED-lit vertical farms. Plenty touts its ability to grow produce year-round regardless of the weather, but the indoor farms require a lot of energy.

While Zimberoff said she doesn’t care for the vertical farm’s kale, which turns out unusually delicate because it doesn’t have to battle any elements, it worked well in a salad dressed with garlicky cashew-based cheese from Sonoma’s Miyoko’s Creamery. Bacon crumbles added bits of crunch and smoke, courtesy of Berkeley’s Prime Roots, which grows protein out of koji, a fungi also used to make sake and soy sauce.

Plenty’s greens and Miyoko’s cheeses are sold widely at Bay Area grocers. Prime Roots was selling directly to consumers online but is currently on hiatus.

Beet tartare: Dicing up red beets and calling it a tartare, a nod to the typical beef version, isn’t particularly new. But the topper of spring onion-laced cream cheese got the dining room talking. It was rich, creamy, smooth and slightly sweet, just like dairy cream cheese. Could it really be vegan?

The cheese comes from Berkeley’s Perfect Day, which made a splash when it released its first $20-per-pint cow-free ice cream in 2019. The company creates real dairy proteins by fermenting fungi, then mixing the two proteins in dairy — whey and casein — with ingredients like coconut oil and potato starch to create, say, cream cheese. The cream cheese, under Perfect Day’s new label called Modern Kitchen, isn’t in stores yet but can be pre-ordered online. At $10 per 8-ounce package, it’s significantly pricier than standard cream cheese.

The crackers on the side, meanwhile, came from Netzro, a Minnesota company focused on reducing food waste by using ingredients like spent grain. While noble in mission and rich with fiber, the crackers were dense and tough. Spent grain is challenging to work with, Zimberoff explained, because there’s no gluten.

Chicken and waffles with blue syrup: The vegan drumsticks from Albany’s Sundial Foods come with skin and bone, a notable break from the ground meat products that dominate the vegan meat scene. A young company, Sundial doesn’t have anything on the market yet, but you can expect to see its chicken next year. The bone felt like a bamboo stick, while the inner meat was reminiscent of the wheat gluten-based faux meats common in vegan Chinese restaurants, except it’s made with chickpeas. Most impressive was the crunch on the skin, which ripped apart in a pleasing, carnivorous way.

The crispy-chewy waffle featured Oakland company Renewa Mill’s okara flour, an upcycled ingredient that uses the soybean pulp byproduct of the tofu-making process. But it suffered from a common vegan baking plight: a harsh aftertaste from too much baking powder. (Renewal Mill’s products are sold widely in Bay Area grocery stores.)

Meanwhile, the vivid blue color of the shiny syrup comes from spirulina, a nutrient-dense microalgae that’s sold online in powder form by Los Angeles outfit Spira. It didn’t taste like much, which isn’t necessarily a bad thing given all of the protein, vitamins and minerals it contains.

Pasta carbonara: Given extruded pastas are often vegan already, it wasn’t too surprising to see Follow Your Heart’s vegan egg replacement in the bucatini. And the cashew-based garlic herb cheese from Miyoko’s worked as a melted-down cream sauce. (Both products are easy to find in grocery stores.)

The most interesting addition was the bacon from San Francisco’s Hooray Foods, which is made from coconut oil, tapioca starch, rice flour and liquid smoke. Baked in the oven, it came out crunchy like toffee — not exactly like pork bacon, but still a satisfying texture and purveyor of salt, fat and smoke. It’s sold at Whole Foods and some independent grocery stores in the Bay Area.

Steak: The grand savory finale, this steak somewhat looked the part with browned edges and red flesh but it’s made from fungi. It’s the creation of West Sacramento’s Better Meat Co., which plans to sell its protein to other plant-based companies to make products. Better Meat feeds sorghum, which is a common grain, and potatoes to mycelium, fermenting the thread-like fungi until it grows into something resembling a whole cut of meat.

The flavor was pure umami, though not specifically of beef. Texture-wise, Zimberoff said the steak wasn’t as convincing as previous versions she’s had from Better Meat — too soft, too mushy, kind of like a meat cooked to submission in a sous vide without any sear. That said, she thinks mycelium could be the next tofu or tempeh, a plant-based protein that commands the center of the plate.

Baked Alaska: With a base of crisp shortbread made with cashew-based Miyoko’s butter, this baked Alaska’s only vegan tell was its high level of sugar. Vegan butter needs more sugar than most to cream, Saneski said. The bruleed shell of meringue was also very sweet but maintained its texture despite using the leftover bean liquid known as aquafaba, which is less stable than egg whites. The trick is to whip the aquafaba longer than you’d think — like a full 15 minutes, according to Saneski.

The butter pecan ice cream came from Brave Robot, a Perfect Day label, and was just as dairy-like as the cream cheese. It’s sold at Lucky, Mollie Stone’s, Sprouts and some independent markets in the Bay Area.