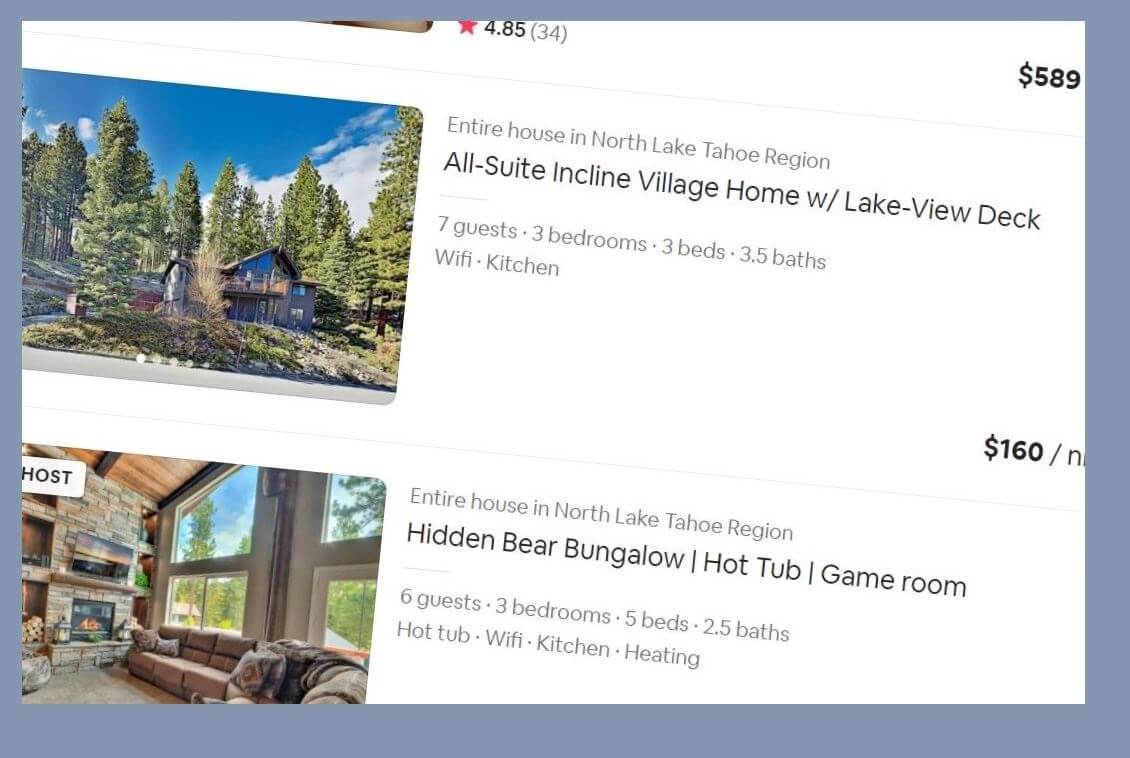 Short-term rentals in nearby Douglas County are capped at 600, except for those also occupied by the owner.

And in Placer County on the California side of the lake, a 45-day moratorium imposed in July on new STRs to “address an unprecedented and growing housing crisis in the region” has been extended to March 2022, citing a “current and immediate threat to the public health, safety, and welfare associated with proliferation of STRs.”

“The housing issues in our community have dramatically escalated, and investments in homes for use as short-term rentals have contributed to inflating property values beyond the reach of local workers to afford,” said District 5 Supervisor Cindy Gustafson in a release. “We need a time out to study this and really understand what is going on to improve our short-term rental ordinance.”

In 2020, Washoe County estimated 90% of vacation rentals in the unincorporated county were in Incline Village/Crystal Bay.

“STRs represent approximately 12.5% of housing stock in Incline Village/Crystal Bay,” the county said in a presentation.

The median price of a single family home in Incline Village is $1.9 million. It topped out at $2.45 million in April, the month after Washoe County approved its STR ordinance.

Since then, Washoe County has permitted fewer than half of the Incline Village and Crystal Bay short-term rentals currently advertised on Airbnb and other vacation rental platforms, according to data provided by the county.

“Right now we are at 790 advertised, but the other day it was 810 so it fluctuates,” says Mojra Hauenstein, Division Director of Planning and Building of rental units reported to Washoe County by Host Compliance, a vendor that tracks online STR ads.

Of the roughly 800 units advertised on Airbnb, VRBO and other sites as Incline Village/Crystal Bay vacation rentals,  the county has permitted 348 properties to operate as STRs, Haunstein says.

County spokewoman Bethany Drysdale was unable to say how much the county has collected in fines against violators since passing the ordinance in March.

A workshop is scheduled for Tuesday to gather input from the public, but the county doesn’t intend to significantly change its laws, according to Hauenstein.

“In January we are going to the Board for direction and clarification. We are not going to change the ordinance itself,” she said in a phone interview. “Substantively, it’s just minor. I hate to say the word ‘tweaks’, but that’s really what it is.”

“I think it’s trying to appease us in some way because they already know the outcome,” says Dr. Staci Baker, a Tahoe veterinarian, of the workshop.  Baker, a wildlife advocate, says vacationers routinely ignore warnings and procedures for safeguarding food and trash, especially from bears, who are then deemed as “too friendly” and as a result, are euthanized by Nevada wildlife officials.

Washoe County’s ordinance places no limitations on the number or density of vacation rentals.

A 96-unit condominium complex at 123 Juanita has 26 permitted STRs, according to county records.  By contrast, the City of Henderson in Southern Nevada limits the STRs in one complex to 25% of the units.

Year-round Incline Village resident Judith Miller doesn’t want a ban of STRs, but she’d like to see restrictions on non-owner occupied rentals, such as those imposed by Douglas County.  She thinks Washoe County is attempting to placate residents by holding a workshop.

“I think the fact that they’re not going to make any substantial changes after promising the public that they were going to do that, this is kind of a feel good exercise, a dog and pony show,” says Miller, a former member of the community advisory board who says she’s been asking the county to limit STRs for seven years.  “This is what I got.”

“The intent of public input is to get an idea of how the ordinance is working since it is brand new, provide that feedback to commissioners, and then receive further direction from them before proposing any sort of changes, if that is even necessary given the feedback,” says Washoe County spokeswoman Drysdale.  “We would be remiss to NOT engage residents along the way.”

“They truly see this little sliver of Washoe County as a cash cow, and any way that they can derive income, bonus for them,” says Incline resident Pamela Tsigdinos, who fears the county will lift current occupancy requirements imposed on vacation rentals.

Tsigdinos says the county is placing residents and visitors in danger. “We couldn’t evacuate if we had to. We don’t even get the funds that come from transient occupancy taxes.  It’s funding some Reno bond measure for a bowling Hall of Fame.”

Tahoe areas except Incline Village crack down on vacation rentals