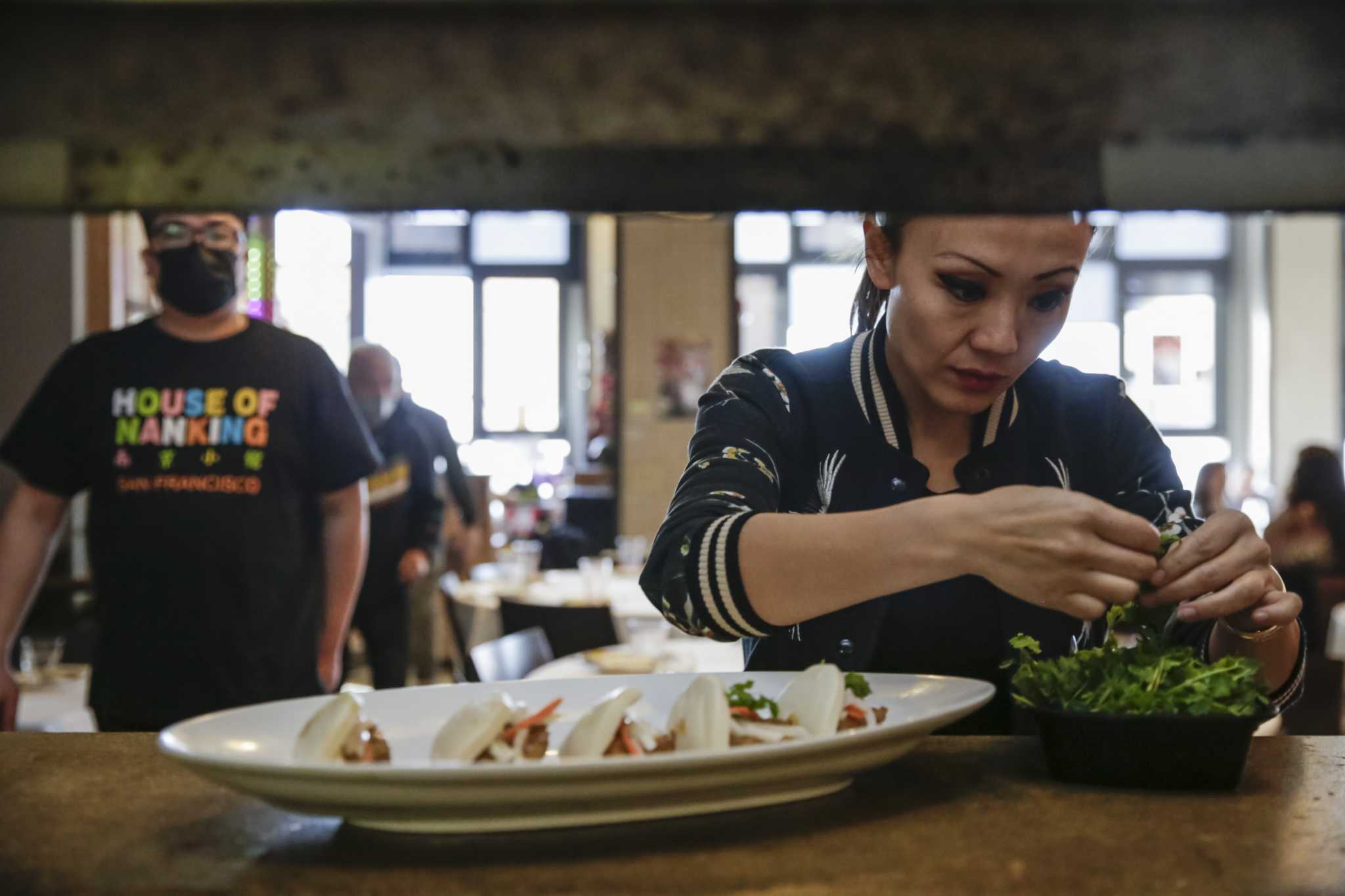 When Kathy Fang recalls her childhood at her parents’ restaurant House of Nanking, one of Chinatown’s most famous establishments, her memory is split distinctly between the good and the bad.

She starts with the bad.

Outside of school, Kathy was stuck spending most of her days at the Kearny Street business her parents, Peter and Lily Fang, opened in 1988 and ran single-handedly. She’d color. She’d try to talk to patrons, if they’d be willing to interact with a bored kid. She’d help out here and there, wiping cutlery and bringing drinks to tables. Kept late on school nights after closing, she’d assemble a makeshift bed, pushing two dining chairs together and using a jacket as a pillow.

“There are a lot of times when I felt resentment for the career choice that my parents picked,” Kathy, now 40, and the subject of the new Food Network docuseries, “Chef Dynasty: House of Fang,” said recently over Zoom. Her parents, she once thought, cared only about the restaurant and making money. “And it’s exactly the opposite. They work so hard so that I don’t have to work as hard, so that I have better opportunities.”

Even so, it’s difficult to say whether Kathy, a two-time “Chopped” champion and co-owner of House of Nanking’s sister restaurant, Fang, works any less hard than her parents did. (Or still do; Peter, 74, and Lily, 73, continue to manage the restaurants full time.)

The good of Kathy’s childhood, then, can be found in her early and ingrained exposure to a chef’s life: the food, the organized tumult of the kitchen, the sociability of a lifelong front-of-house glad-hander. All the skills and abilities, in other words, that Kathy would need when she, stifled and uninspired, left the corporate world in her 20s and returned home to join the family business.

Most crucially, being a daughter of House of Nanking meant understanding a particular vision of Chinese American cuisine, one that made her father a staple figure of San Francisco’s food world. Today, their relationship as collaborators, a loving push-and-pull dynamic between generations, forms the core of the new show, which premieres Dec. 27 on Food Network and streams on Discovery Plus.

“This (show) is just something that I couldn’t even dream of — our little story, that my dad created something with my mom. Every time I think about it, I think about how much hard work my parents put into it,” said Kathy, choking up. “So I hope people actually see that, and they understand why my relationship and dynamic with my dad is the way that it is. We’ve come a long way.”

When Peter and Lily opened House of Nanking, it came after years of toiling in restaurants, while the three of them lived in an SRO in Chinatown, then later on the border of the Tenderloin. “It was hard,” Peter recalled. “I worked three to four jobs, sleep maybe five hours and work again all day. I served tables, was a bartender at night.”

With House of Nanking, named for the region of China that Lily’s father was from, Peter was determined to offer new ways to eat Chinese food.

“Everywhere that you would eat Chinese food, it was always the same thing,” said Kathy. “Whether we’d go with our family or friends, you could memorize what the courses are going to be. So we were always bored of it.”

After his initial menu of homestyle Shanghainese food struggled to bring in business, Peter began experimenting with new takes on familiar favorites. He noticed the distinctly American combination of sweet potatoes and turkey during Thanksgiving and came up with the restaurant’s longtime best-selling dish: the Nanking sesame chicken, a crispy chicken item with a little spice and toasted sesame that’s paired with glazed sweet potato. Peanut butter was always an object of fascination to him, reminiscent of the sesame paste ubiquitous in China — so he whipped up the restaurant’s peanut sauce, now described on the menu, with only slight exaggeration, as “world famous.”

“Back in the late ’80s, he was doing what chefs are doing now,” Kathy said. “He was essentially innovating.”

That spirit of experimentation continues at Fang, where Kathy will be the first to wave away tired questions about authenticity.

“Everything is a version, an evolution, a rendition of what it used to be,” she said. “If you go to China, you’re going to have things that are entirely new. What I learned from my dad in terms of Chinese food is that evolution is a natural thing. It happens in all cuisines.”

But perhaps the most famous legacy that has been passed on to Fang is the chef’s  unconventional ordering system: Kathy or Peter will often take over ordering for patrons, a  practice that unwittingly fueled House of Nanking’s early success and would go on to shape its mythos.

In the early, leaner days, before House of Nanking remodeled and expanded in 1997, Peter was what Kathy calls a “one wok man.” He could be seen in the kitchen at the front of the restaurant, cooking every single dish on the kitchen’s one burner, while Lily alone took orders. “There was no way he would be quick enough to service everybody,” Kathy said. “So out of efficiency, he was like, forget this ordering system. I’m just going to order for these people.”

That often meant superb dishes patrons didn’t know they wanted — and also an exposure to Peter’s tendency to brusquely refuse orders he didn’t believe they should be making.

Kathy knows this stubborn, if loving, attitude better than anyone, which is particularly visible in the occasional tug-of-war between old and new inside the kitchen at Fang.

“We think very much alike, and I know she has a lot of her own ideas,” Peter said. “Some are good and some are, I don’t know, maybe not so good. So of course we don’t agree all the time.”

Most of the restaurant’s modern vision, from its contemporary interior design to its adventurous menu, was reached through Peter’s gradual concessions. Change was in the air: In 2009, Fang opened within SoMa’s tech hub, providing a big departure from House of Nanking’s typical clientele, and was immediately a hit during a moment of economic recession.

Surprisingly, though, the current pull toward ongoing evolution — continual exploration on their menu, adapting to the social media age — has become more of a battle between father and daughter than it was in the early days of Fang, Kathy noted. “My dad’s kind of at that point where he’s like, ‘I’m really happy with what we’ve established, let’s just sit on it,’ ” she said.

Kathy hopes the family can eventually turn the Fang name into a lifestyle brand, selling food and cooking products in stores to bring their style of Chinese American cooking into people’s homes.

But “House of Fang,” a show on a major cable network, will already achieve that in a way.

“It’s special, like a piece of history captured,” Peter said of the show. “Now our future generations have proof, and can see the family legacy.”