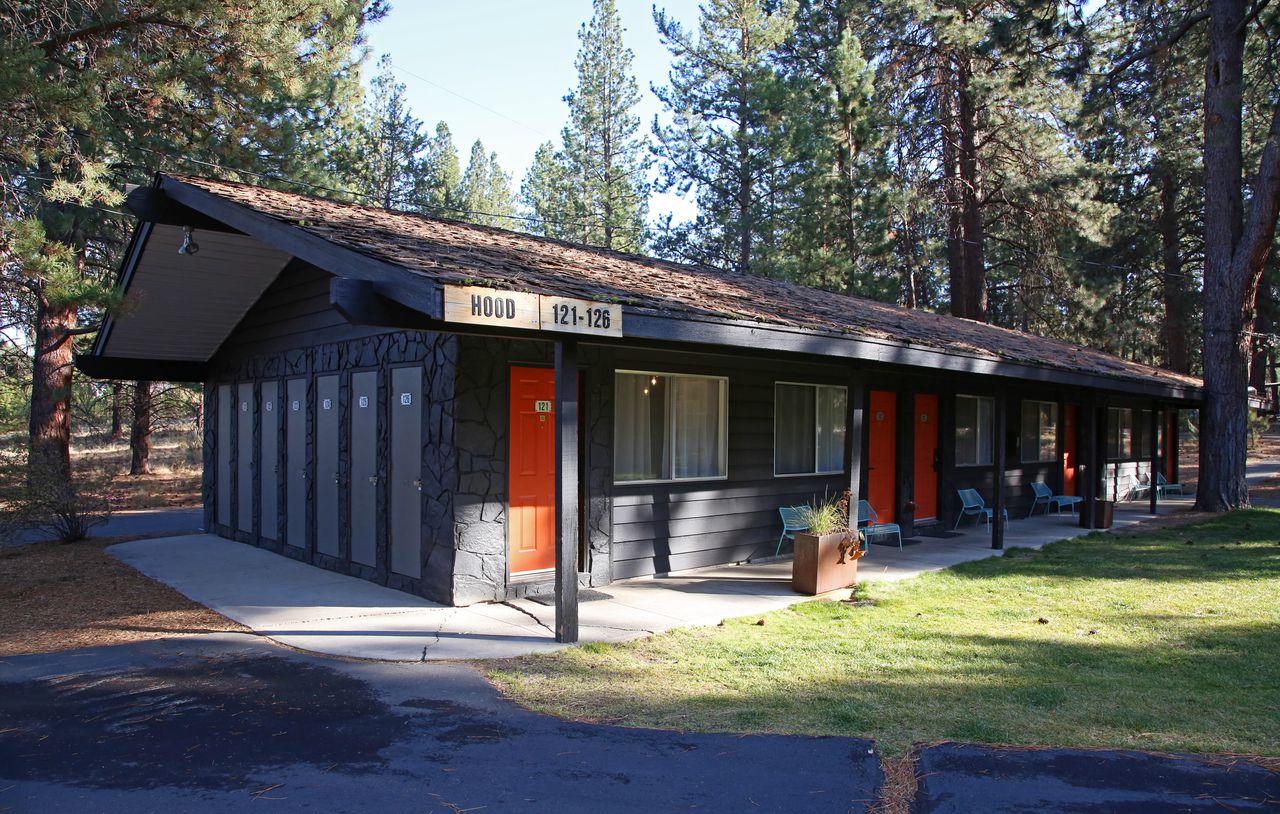 Those looking for a place to sleep after a long day of skiing or mountain biking around Bend should be pleased with LOGE Bend — a modern motel aimed squarely at the outdoors community in central Oregon.

With bike and ski racks in the rooms, on-site gear rentals, and easy access to local trails and slopes, LOGE (pronounced “lodge,” and an acronym for “live outside, go explore”) aims to serve a very specific demographic that just so happens to make up a sizable portion of tourism in central Oregon.

Parent company LOGE Camps, which has four other properties in Washington, California and Colorado, creates “outdoor-focused” hotels with features attractive to both tourists and locals.

Gavin Burns, head of business development for LOGE Camps, said the company tried to tread lightly as it made its foray into central Oregon. Instead of buying a piece of land and building a new hotel in Bend, the company decided to lease an existing institution: the Entrada Lodge, an aging motel on the road to Mount Bachelor and the Three Sisters Wilderness, two of the most popular outdoor destinations in the region.

After taking over the property in 2018, the company spent about a year and a half and roughly $1 million renovating the motel’s 79 rooms and building out new amenities ­— like the cafe that now serves local beer, cider, wine and small bites, including pastries from Bend’s beloved The Sparrow Bakery.

LOGE also took advantage of the ample green space on the property and added communal areas, fire pits, outdoor kitchens, tune-up stations for bikes and an outdoor stage that hosts live music in the summer.

The cafe and live music are amenities offered to the general public in addition to guests, which LOGE hopes will prompt commingling of locals and tourists on the property.

“When you actually get to meet people from the community, you feel like you are a part of the community,” Burns said. “That’s a special feeling.”

Those who choose to spend their stay in their rooms will find several outdoor-focused amenities, including bike and ski racks to secure gear overnight, as well as Yeti coolers and one of the most distinctive features at LOGE Bend: bright orange hammocks hanging from the ceiling.

“We just looked at different ways to bring the outside in,” Burns said of the decor. “For us, the most important thing is that outdoor adventure feeling, and what more could you do to excite people than to walk in and have a hammock ready in your room?”

LOGE Bend offers five types of rooms, from the single queen to their “whole crew” family room, which comes with a queen bed and bunk beds. About half of the rooms are double queens that sleep four, advertised to friend groups or families who are adventuring together.

Rates are intentionally kept affordable, even during holidays and busy stretches in the summer, Burns said, with average rates running from $109 to $119 per night (the most expensive room, the king suite, tops out at $194 per night on weekends).

There’s also more affordable hostel-style shared rooms on the property, but they’ve been closed since the start of the COVID-19 pandemic and might be phased out for good, Burns said.

While the rooms might seem well-crafted for social media shares, LOGE Bend is really more of a budget motel than a bougie boutique getaway. When LOGE Camps renovated the old Entrada Hotel, they replaced the floors, put in new furniture and updated the decor, but the bones of the old side-of-the-road motel are the same, retaining a retro feel despite the modern look.

While comfortable, the rooms aren’t designed to make you feel luxurious — they’re a place to lay your head. By advertising to people who will be spending most of their time outside, LOGE has been able to focus its investments into the smaller amenities that their niche demographic can’t get at traditional hotels, like the in-room gear racks and on-site bike repair facilities.

“We build these hotels for people who want to get outside and see these great areas,” Burns said. “In Bend, we try to get people closer to where all the enjoyment is” – outside.